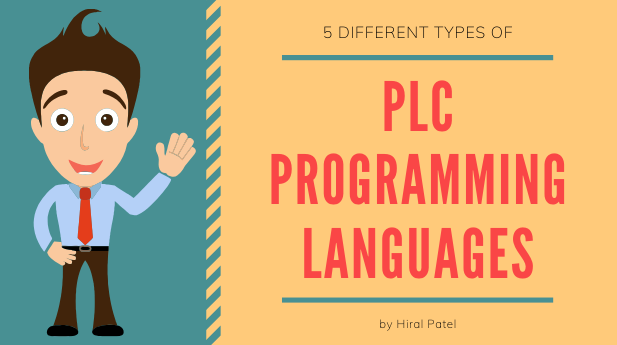 Hey Everyone! How are you?

First of all, Thanks for giving me a great response on my blog What is PLC? How does it work? 100% Complete Guide.

So, Let’s dive into this.

Let’s see all these languages in detail one by one.

A ladder diagram is usually called as a “Ladder Logic”, this represents a program by a graphical diagram.

This looks like relay racks, each device in the relay rack would be represented by a symbol on the ladder diagram.

The name ladder diagram is based on the programming language pattern similar to a ladder, with two vertical rails that shows electrical connection among a series of horizontal rungs between them.

Function Block Diagram(FBD) is another PLC programming language that is a popular one and looks like a graphical type like a Ladder Diagram(LD).

In Function Block Diagram inputs and outputs are connected in blocks by connection lines.

The ST consists of various statements with complex statements and instructions like IF, WHILE, CASE, RETURN, FOR, REPEAT, etc.

It is a very powerful language that can easily execute complex mathematical logic. Sequential Function Chart(SFC) is also a graphical programming language that is similar to flow chart like logic.

In this PLC programming language, the program is divided into steps that act as a major role.

Steps consist of an action that occurs when a programmer wants them to happen. Steps can be active or inactive.

Transitions are the instructions which are used to move the program from one step to another.

As per most of the programmer and user of PLC, Ladder Diagram is the most popular and used PLC programming language due to its easy understanding and similarity to relay logic.

Thanks again for reading and sharing this blog with your friends and colleagues.