What is a Smart Transmitter?

Transmitters are used to measure physical variables such as temperature, pressure, level, etc. A transmitter converts the physically measured value into an electrical signal. Generally, an output signal is in the form of voltage(0-5V, 0-10V) or current(0-20mA, 4-20mA).

Even if this conventional transmitter is working fine, much industrial application demands more precision, performance, and reliability. Therefore, a smart transmitter is getting significance these days.

A smart transmitter is a device that is used a microprocessor as an integral unit. The smart transmitter has its own memory and it can also be programmed. It has abilities to perform calculations, do self-diagnostics, and can communicate with other devices.

The most common communication protocol on which the smart transmitter is communicating with other devices is HART Protocol. The HART stands for Highway Addressable Remote Transducer.

A transmitter compatible with HART protocol has two outputs: The conventional analog signal of 0-10V or 4-20mA and a digitally superimposed signal. 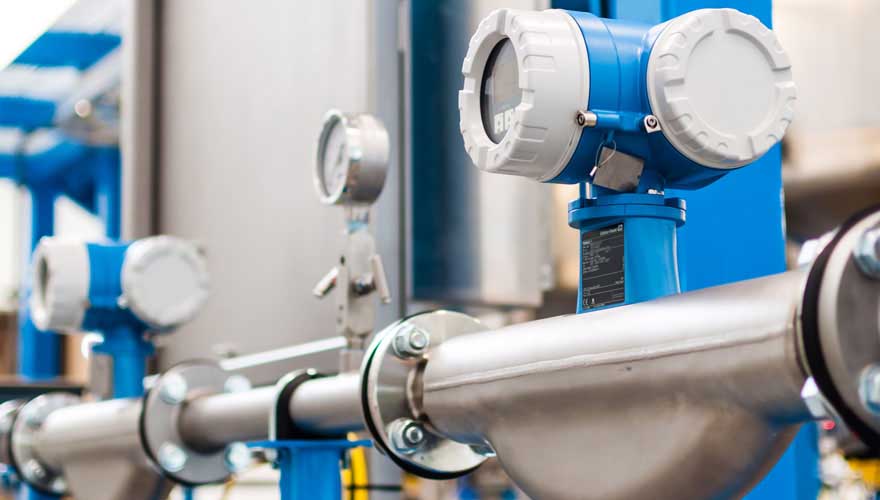 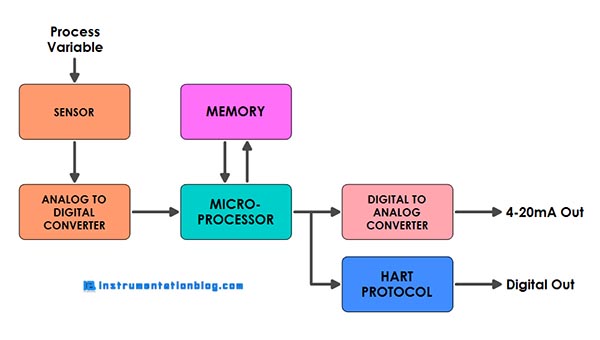 There are some integral parts of the smart transmitter, such as

Sensor or Transducer measures the physical signal from the process variable such as temperature, pressure, level, etc., and then converts it into an appropriate electrical signal. This electrical signal then applies to the Analog to Digital Converter.

The Analog to Digital converter converts the electrical signal into a digital count, which is a representation of process variable(PV) and then fed into the microprocessor.

The output of the microprocessor is fed into a Digital to Analog Converter, which converts the digital count value into an actual analog 4-20 mA electrical signal. This output is also known as current loop trip or 4-20 mA trim.

How can it differ from a conventional transmitter?

This is the simplest block diagram of the conventional analog transmitter. The conventional transmitter accepts signals from the sensor and then directly fed into a set of electronics circuits, which then converts this signal into an appropriate electrical signal and gives output in the form of a 4-20mA loop current.

While in the conventional transmitter, the output is in the form of a 4-20mA loop current, which doesn’t allow user digital reading.

The zero and span adjustment in the conventional transmitter is limited by 2-3% of the fixed reading value.

While smart transmitter provides a better display of parameters that is showing information about zero and span adjustment, instrument loop identification, diagnostics, and multiple process variables.

⇒ Remote calibration is possible and provides a facility of re-ranging

⇒ Has its own memory to store information about the last calibration

⇒ How does a solenoid valve work?

⇒ How does a temperature scanner work?

⇒ What is a Servo Motor? How does it work?